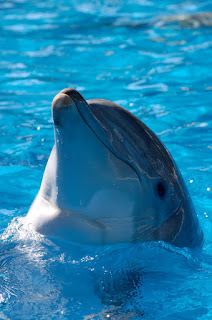 Starting a new business many years ago required taking risks, and my emotions were running wild. I needed a positive symbol of awakening heart energy and chose a tattoo of a dolphin swimming around my heart. When I told my mother, I was devastated by her response: "Why would you want to disfigure yourself?"

You've had similar experiences, I know. People who take risks to define themselves according to their own needs and dreams often have to overcome the almost insurmountable authority of social conditioning.

Many of us had the childhood experience of being told what we can't do: what's not normal or polite, what's dangerous or beyond our abilities. We were left with a sense of powerlessness to predict what will make us secure. Even as adults, these early messages haunt us: Who will criticize me for trying something new? Who will laugh at me for this idea I have? What will I do if this doesn't work out?

Sometimes we overcome our insecurity by whistling in the dark. (I'm not afraid! I'm not afraid!) But when faced with a tough decision, we may also endure an internal debate: What do I do now? Which of these paths do I take? Can I trust my own judgment? Will I give myself permission to go for what I want?

This is the paradox: when we act as if we're powerless, in that very act we give our power away. Until I found my own personal power, until I could stay clear about what I wanted to do and why, I fell into the victim role, pointing my finger outward. Initially, I was angry at how my mother, in spite of her generally loving support, could undermine my attempts to break the mold. I felt hurt because I wanted her approval.

When I could finally come from my center and let go of my attachment to her opinion, I was freed from reacting to Mom's response and touched by her own fear of change.

How many times have you stopped yourself from doing something you were excited about because someone else put on the brakes? My mother was uncomfortable with the unfamiliar, just as your friends and family may be when you take a risk. My tattoo was right for me. And I revamped my business because it drew me to work that's richer and more meaningful, even though there were lean years.

In the process, I learned an important lesson. Sometimes we begin to doubt ourselves when others criticize, worry, or question our urges to live our lives more fully. We need to remember they're actually questioning themselves, unable to imagine doing what we've found the courage and vision to do.

Years later my life was saved from breast cancer by a bilateral mastectomy. I was not afraid of losing my femininity, but I was concerned about damage to my dolphin. My surgeon was able to keep it almost completely intact, and the tattoo's symbolism has carried me through surgery, recovery, and the five years since then with an open heart.