Years ago a colleague challenged my skepticism about the usefulness of the Myers-Briggs Type Indicator. “Have you studied the MBTI?” he asked. “Have you been trained in it?”  I had not, I told him. “Then perhaps you should know what you’re saying ‘No’ to.” Luckily I was open enough to see the flaw in my logic. I did take the training, if only to be able to give an informed “No.” Instead, I’ve found ways to go deeper with the MBTI than my early, negative, uninformed experience of it could have predicted.

Skepticism can be healthy. Woe to those of us who believe everything we read or are told. To the Greeks, in fact, “skepticism” meant inquiry, the essence of their position not doubt or denial or disbelief, but rather continual exploration – a willingness to keep their minds open to new possibilities.

But when skepticism reflects a closed mind instead of an inquiring mind, it becomes a defense against learning more, against possibly changing a familiar worldview. The basis for this kind of skepticism is fear. When I labeled the MBTI as “superficial” I was new to consulting, eager to defend my own training and credentials, and quick to dismiss something I knew very little about. I was afraid to change my point of view – I needed to believe I knew all I needed to know. I thought I was right; others were wrong.

The name calling itself is a cue to defensiveness. And while my describing the MBTI as “superficial” was only slightly demeaning, the attitude behind any word can color it significantly. During a recent check-up with a doctor I’m very fond of, I mentioned I’d contributed to Obama’s campaign. The immediate, sour look on his face told me he found my point of view completely unacceptable. He stepped back and said with distaste in his voice, “He’s a MUSLIM!” Aside from the fact that Obama does not pray to Allah, as far as I know, so what? Romney is a Mormon and Mormons have some beliefs that differ, I’m sure, from my doctor’s fundamental Christian upbringing. His comment about Obama was not founded in skeptical inquiry, it was based on fear of the unknown.

When I heard that some cynics were questioning the healing qualities of my qigong classes, I wanted to ask “Do you really believe that thousands of us, representing all ages and from all walks of life (students, professors, artists, Ph.D.’s, medical and other professionals) are completely deluded about benefits we directly experience?” But I’ve learned the hard way that no amount of evidence will convince someone whose mind is closed. So let me simply offer my condolences to anyone who jumps to negative conclusions and name-calling about my qigong practice, instead of following skepticism’s true intent of inquiry. If only they knew what they’re missing. 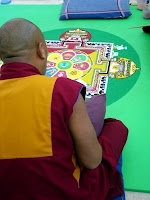 Now often demonstrated by the Dalai Lama and groups of Tibetan monks, the sand mandala ceremony begins with chants, music, prayers, and then pouring millions of grains of sand in bright colors from a metal tube called a chakpu. The finished mandala is about five by five feet in diameter, and takes three to five days to complete.

The creation process concludes with a consecration ceremony, and then... they dismantle the mandala!

Formed into traditionally prescribed Tibetan iconography that includes geometric shapes and historical Buddhist symbols, the sand mandala is a tool to consecrate and bless the earth and its inhabitants. The dismantling of the mandala symbolizes the impermanence of all existence.

Those of us who have become attached to life, and fearful of losing it, have much to learn.
Posted by Mary Bast at 8:22 PM